Simon Marsiglia was born in Helsingborg, Sweden, 1993. He currently lives and works in Amsterdam, the Netherlands. Simon received his bachelor in Art and Design at the Gerrit Rietveld Academy, Amsterdam. The New York Times referred to Simon’s work as ‘outré adornments’ in connection to the exhibition ‘Non-Stick Nostalgia’ at the Museum of Arts and Design, New York. Simon stands in staunch opposition to the gem-on-a-white-background display phenomenon, as he believes that all adornments require context to come to life. He practises alternative methods of world-building to present his works in real live and online. Simon intends to bring fantastic elements to the field of fashion by inhabiting the grey zone between wearable object and sculpture.

This interview is the result of a conversation that took place via videoconference between Felien Vandermotten and Simon Marsiglia in July 2021.

I would say I consider myself to be a maker of all things wearable. To tie that into the description of my work: I tend to stray away from referring to myself as a jewellery maker, because that is not the background that I come from. I would rather describe my work as wearable sculptures.

How would you describe your way of working?

I would say that I make props for non-existing movies. I use fiction as a strategy for making objects. My work often starts out as a written fictional story. As I write the story, objects appear as a reaction to a character, situation or need. I create a reason for the objects to exist. Then I visualise the objects appearance and then go on to creating it in reality. I prefer to not present writing script with my work, however, the way I display the work aims to tell the story. By placing objects in a context, you can tell a story without being too obvious. That is how I perceive it.

It is interesting when one of the objects I have made starts telling a story that I didn’t intend. I encourage the viewer to build their own story. That freedom is important. There was an exhibition opening where I had the opportunity to give an introduction. I told a story that belonged to one of the objects, but I did not mention to which object in the exhibition this story belonged. I saw that this added to the experience. People start to look around for things they heard in the story.

How did you come to this kind of artistic practice?

I came to the Netherlands from Sweden 4 years ago. That’s where I discovered my interest in creating something with a function. I like immediate feedback on what I make. Mainly because I have no patience. My main artistic medium before was drawing. If I make a drawing and it's hanging on a wall it is very hard to get immediate feedback. But when you make wearable things, you can wear it in public. Wearing things enables an analogue version of posting a picture online. You get an immediate response and people are more connected to the work. The first reaction is also the most honest one.

I visited an exhibition in 's-Hertogenbosch that was called Cult. It was the first jewellery exhibition I went to. After this exhibition my interest for contemporary jewellery increased. I also found a Current Obsession magazine there. I was so intrigued that I contacted the people from the magazine. I ended up having a long conversation with Kelly Riggs, the editor of the magazine at that point. She helped me a lot and introduced me to the contemporary jewellery scene.

I like to think that my work exists in a grey zone of different creative areas: picking influences from jewellery, a little bit from fashion, a bit from cosplay and some from movie props. Putting it all in this melting pot and somehow ending up with a recipe to make what I make.

Through writing I create a starting point for myself. I always go back to the archive of stories I have made when thinking of new ideas. It is easier to relate to fiction when it carries a little bit of reality: when there is a bridge where you can cross from reality into fiction. For the GEM Z talent acceleration program that I’ve been part of the last year, I tried to figure out a way to incorporate everyday interests of my own into fictional stories and objects. I very often browse the web looking at various ridiculous fashion accessories and garments. So, I started to acquire some of these pieces of clothing ranging from a Moncler puffer jacket for dogs to some Balenciaga sneakers. All in order to remix and alter them, and to give these expensive and seemingly useless fashion products another purpose in connection to my fictional stories. 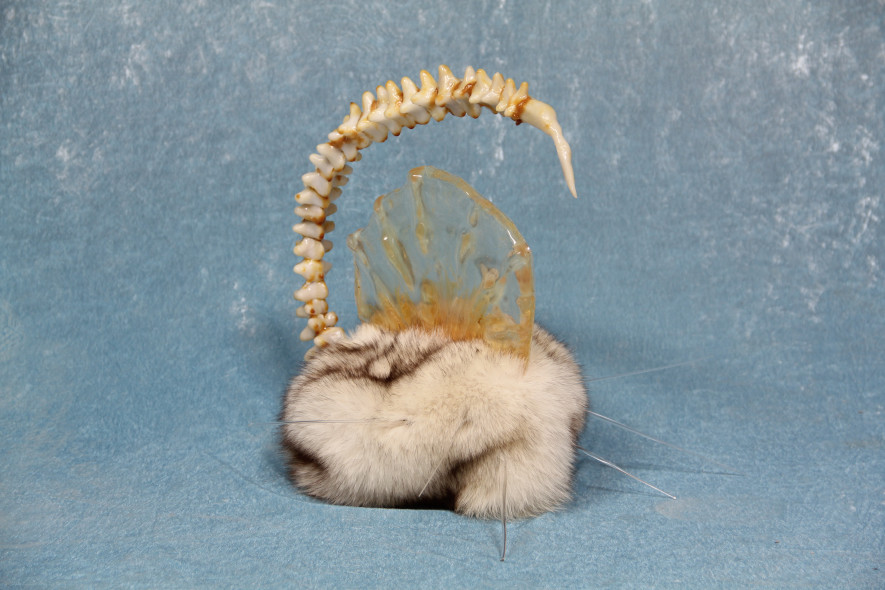 What was your main motivation to apply for a residency in DIVA?

I don’t come from a traditional jewellery background, I did not study jewellery. That being said, I do think you make the best things when you are out of your comfort zone and investigating things that are new. Curiosity really shows through in an object. The firsts steps are always the most interesting. In that sense it would be interesting the lock myself into a traditional jewellery making environment en see what comes out on the other side.

Being a beginner is often the advantage. If you spend a lot of time in the same field and you keep perfecting things, the outcome tends to be very clean and streamlined. Then objects look dead to me. An object that carries traces of curiosity is more interesting. When I say uncharted territory, or new experiences, it can also mean a new material. It doesn’t have to be a huge change. I will always carry with me my interest in movie props for example. That doesn’t mean that I will make the same thing over and over again.

What do you intent to do and improve upon during the residency?

I want to improve and investigate traditional or conventional ways of jewellery making so that I can break the rules. Sometimes a piece that is clean, well made and perfect is just that and nothing more. It is more interesting to me when I can imagine that this object was dropped of a ship, then swallowed by a giant sea creature and then washed up on the beach 500 years later. How would it look then? That is more interesting. What kinds of trauma this object goes through and the marks of time and history really fascinate me.

I also intend to research various methods of distressing or damaging metal. It would help me in my practice of having a piece tell a story. The damages are the traces of the story the object tells. They are the reason for the piece to exist.

What is your personal journey in art?

It is important for me to place myself in an international environment. That is why I went to the Netherlands and to the Rietveld Academy. To surround myself with different people, from different backgrounds, with different creative energies.

What is your personal routine when working? Do you have certain rituals?

I create distractions for myself. I like it when there are things going on in the background. Music gives me energy and watching something when working takes the edge off the seriousness. The work I make becomes stronger if I have a community of creative people around me. I work best in a shared studio space. Your friends can also be sources of inspiration, it doesn’t always have to be individual.

How has your practice changed over time?

Before I came to the Netherlands, I used to draw a lot. Now drawing is a tool for creating sculptures and wearable objects. I am very interested in fashion and accessories in general. I used to make a lot of fake branded stuff and mock-ups of logos when I just arrived in the Netherlands .

The GEM Z program has given me the opportunity to look back at my works: what did I drop on the way, where am I now and is there something I want to reintroduce? It is important to look back. Of course, you want to look forward and ask “what am I going to make next?”, but it is equally as important to look back and say “what have I done and what have I done well” and “why did I stop doing it and would it be possible to reintroduce it again?” It is important to realize where you are coming from as a creator. You can always be nostalgic, but you must be critical to your own nostalgia. You can give your nostalgia a twist and do something new with it. I will always draw to a certain extent. It is good to know that I’m kind of good at something. I will never stop drawing, but I use it as a tool now.

It is easier to relate to fiction if it is somehow based on reality. The story for the project I am creating in Rotterdam is taking place on a bioluminescent beach. The objects all come from a fictional narrative that takes place on this real beach in Puerto Rico: Mosquito Bay is the name. I figured, if something crazy alien stuff would happen, where on planet earth would this happen? It would happen there, it looks out of this world, but this beach really exists.

What part about being an artist do you enjoy the most? What is your favourite part?

I enjoy making custom work for a musician or seeing my work in a context that tells a story. I don’t think my work is finished until I put in a context. I am not a fan of portraying my objects on a white background. What I enjoy the most is seeing my pieces come to life when someone is wearing it. I don’t think my job is done when the object is made, it needs to be in a context. Very different things could be the background, anything but a white background basically. Seeing the pieces come to life that is my goal. A big part of my practice is to depict myself with my pieces on so creating a context. And to give myself the opportunity to dress up and be this semi fictional character, I think it is a nice performative part of my practice.

I make big things that people wouldn’t necessarily buy for everyday use. So, I recently started to rent out my objects. When you make pieces, I often get requests for photo shoots or editorials. The relationship between a maker and a stylist needs to change. It is very much taken for granted that you can just borrow things for free and then return them in whatever condition you feel like. I don’t think that is a good way of moving forward. So now I started renting out my pieces instead. I believe, this is the way to treat it. I love working with editorials and photo shoots and there should be a mutual respect.

What inspires you to create? Where do you find ideas?

I often pick inspiration from monster movies. Anything that is scary at a safe distance is interesting. Movies that combine animatronics and visual effects, like Aliens or Jurassic Park. I sometimes feel that I make movie props for non-existing monster movies.

What is your dream for your art career?

I don’t know what the future holds, but I am very intrigued by it. 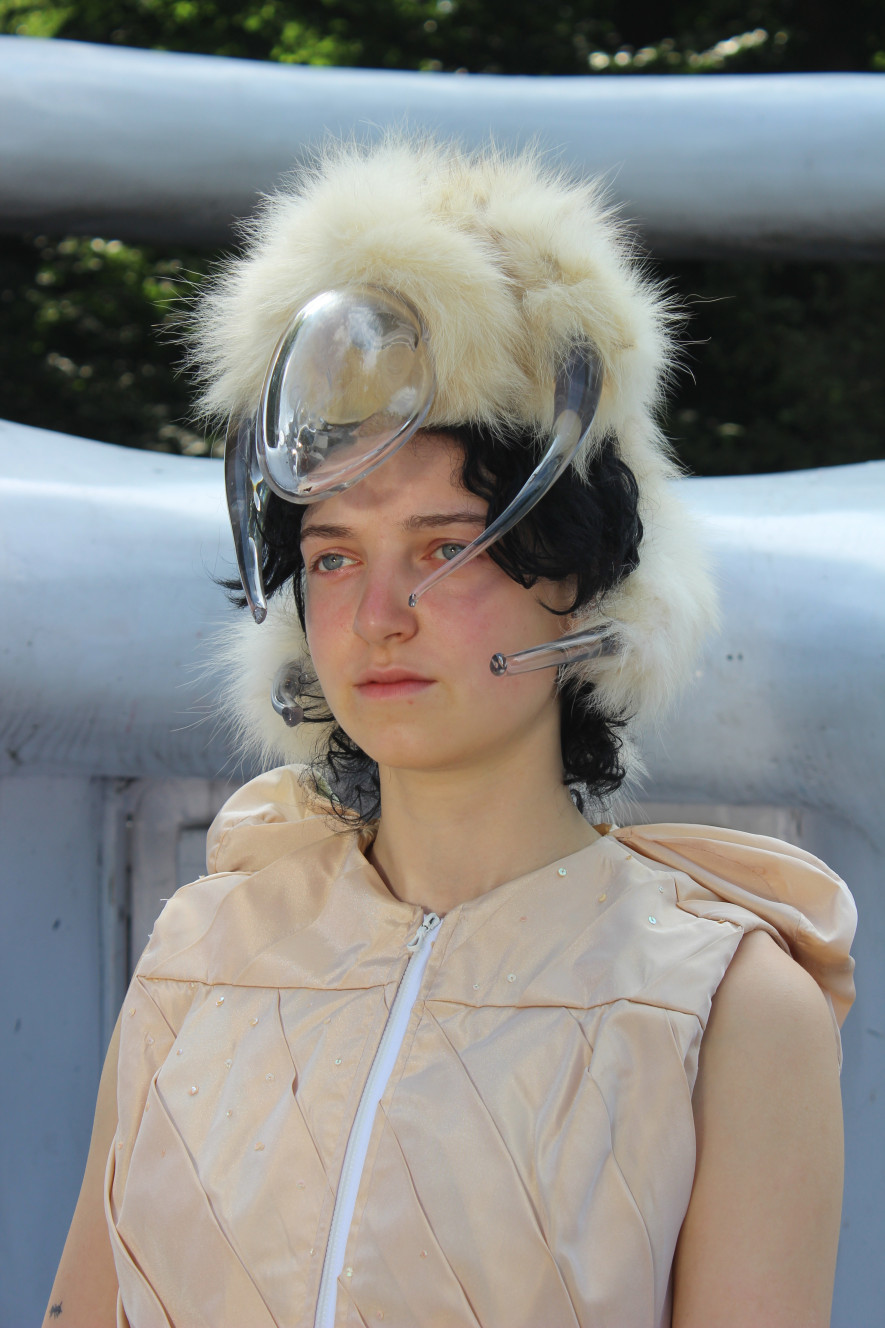