The DNA of collecting - DIVA versus Gilbert

Objects from DIVA, a Brilliant Story that engage in dialogue with the Rosalinde and Arthur Gilbert Collection.

There is considerable overlap between the areas in which Rosalinde and Arthur Gilbert chose to collect and the collection held at DIVA in Antwerp – the place in Europe where art and luxury products have converged from all points of the compass since the sixteenth century. For certain pieces from the Gilbert Collection, particularly those of Antwerp or Flemish provenance, the exhibition Masterpieces in Miniature at DIVA feels like a homecoming. The name Hennekin and Heylbrouck may not ring a bell today, but in the seventeenth and eighteenth centuries their silverware and engravings were second to none. Had they had the chance, the Gilberts would have gone to great lengths to acquire a number of pieces now in DIVA’s collection, particularly items on display in the Room of Wonders.

Discover which objects these are by following the trail in the Masterpieces in Miniature exhibition, identifiable by

Scan the QR code and find out below how they relate to the Gilbert Collection.

“Als alle ander fogels sin thoe neste sois min flige beste.” (When all the other birds are in their nest, my flight is best.) This verse engraved on the Antwerp owl cup dating from 1548-1549 derives from the Zutphens songbook in which the amorous owl is rejected by the nightingale and finds himself in limbo. Today, however, he can direct his attentions to a slightly younger bird from the Gilbert Collection: a partridge from Neurenberg by Georg Rühl. Like the owl cup, there are several layers of meaning to the partridge cup. The partridge symbolizes feminine forces and for Catholics on Christmas Day it symbolizes Jesus Christ. In 2001 Arthur Gilbert was knighted. This silver and mother-of-pearl partridge served as a model for the heraldic symbol at the centre of his coat of arms. 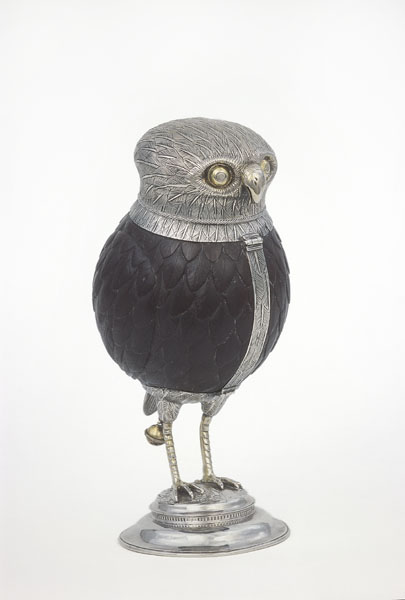 Thanks to the Pierre Lunden Bequest, DIVA has in its possession a gold snuffbox made in Paris in 1739-1740 by Pierre Croissant to a design by Juste-Aurèle Meissonnier. Meissonnier’s rococo models were eagerly used as source of inspiration and copied in printed form and in silver, in England as well as on the European mainland. Leading exponents of the English rococo included the Huguenot Samuel Courtauld. His chocolate pot dating from 1750-1751 is a textbook example. Arthur Gilbert purchased it in 1985.

Sometimes gifts took the form of insignia, but gold snuffboxes embellished with crowned monograms or portrait miniatures were also representative and valuable presents, particularly when set with diamonds. In the nineteenth century, unfinished gold snuffboxes were purchased in Hanau and adapted for a particular occasion by jewellers with a royal warrant. Around 1883 King Leopold II chose to integrate his portrait, painted from a photograph by the Géruzet brothers. In 1837 Queen Victoria, a first cousin of Leopold II, opted for her monogram VR.

Objects relating to Napoleon Bonaparte are much sought after by collectors. DIVA is the proud owner of a silver jug set with the portrait of Napoleon, which was made with an eye for detail by Joseph Lecocqmartin sometime between 1809 and 1815. The jug may have been at stake in a competition organized in Antwerp in 1811 to celebrate the birth of his son Napoléon François Charles Joseph Bonaparte, king of Rome. Himself a fervent user of snuff, Napoleon presented gold snuffboxes bearing his portrait on many occasions from 1804. One of them, featuring an inlaid portrait attributed to Jean-Baptiste Isabey, was acquired by Arthur Gilbert.

Image of the snuffbox from the Gilbert Collection click here.

DIVA’s jewellery collection contains several exceptional portrait miniatures. A ring set with a portrait miniature and old brilliant-cut diamonds derived from a collection belonging to Mrs. Ludo Van den Abeele, which was sold at the Van Herck auction house in Antwerp in 1971. As is often the case with portrait miniatures, there are no clues as to the identity of the lady in question. A British lady sometime between 1780 and 1820? Certainly, Great Britain was an important market for portrait miniatures like this one in that period. But even if it was inscribed, its identification would be a throw of the dice. Who are the Mr. and Mrs. Tilson who were painted by Gervase Spencer and Christian Friedrich Zincke respectively? 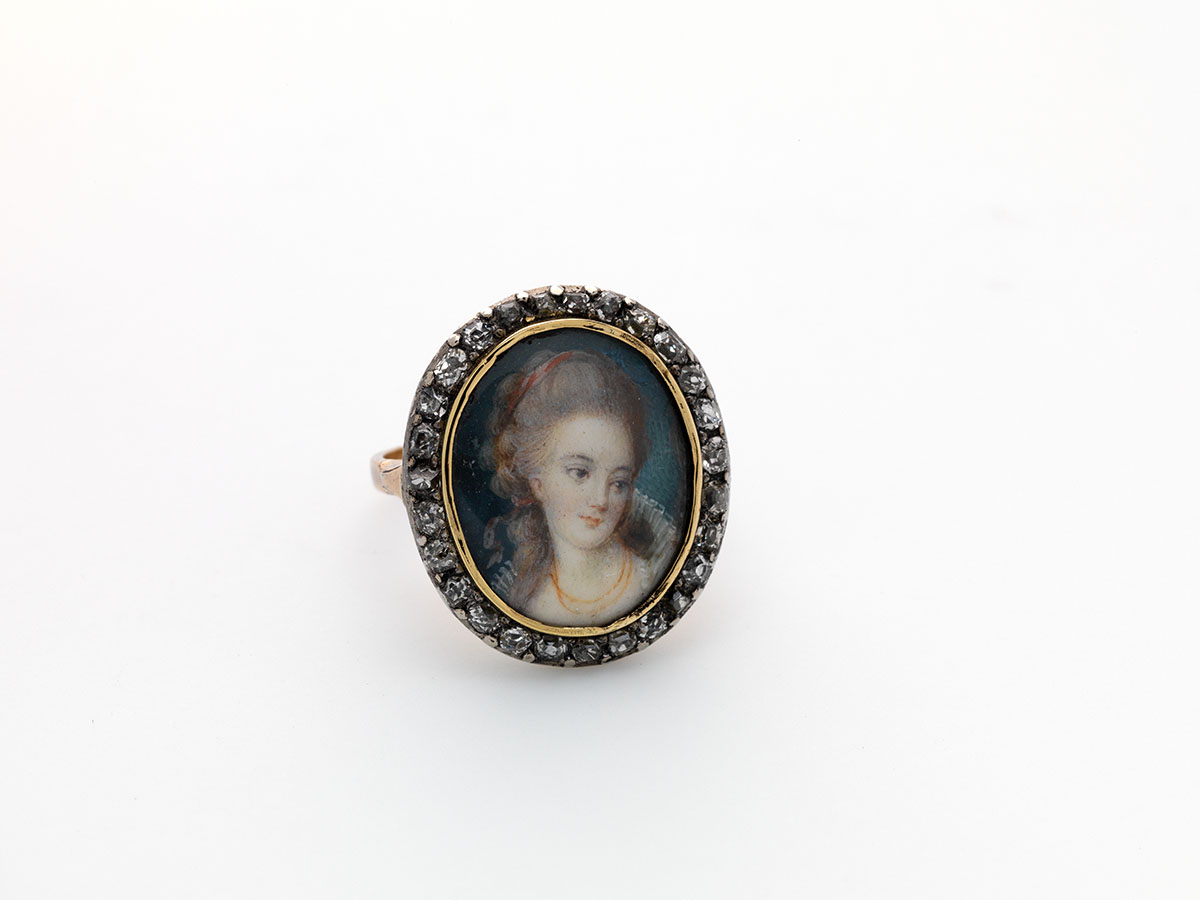 Masterpieces in Miniature: Treasures from the Rosalinde and Arthur Gilbert Collection. A V&A exhibition – Touring the world with the support of the Gilbert Trust for the Arts – presented at DIVA, museum for diamonds, jewellery and silver, Antwerp.